Dr. Tyler earned his PhD in Biomedical Engineering from Case Western Researve University in Cleveland, Ohio. He is currently a Kent H. Smith II Professor of Biomedical Engineering at Case Western, the Director of Engineering, Quality and Regulatory Affairs for the APT Center, and the Director of the Functional Neural Interface Lab at Case Western. Dr. Tyler is an expert in neuroscience, neural interfacing, neural prostheses, and is the recipient of research awards from the VA Merit Review program, as well as the NIH, DoD, DARPA and other external sponsors.

The purpose of Dr. Tyler's research is to improve human neurologic health and function through the integration of engineered devices into living systems. The goal of his Functional Neural Interface Lab is to advance the field of Neural Engineering in three specific areas:

(i) Clinical implementation of devices in neural prosthesis systems for individuals with diseased or compromised neural systems. See photo and videos below.
(ii) Advanced devices to improve extraction of information from and activation of the human nervous system.
(iii) Neuromimetic interfaces between neural tissue and engineered devices. A neuromimetic interface is defined as an electrode, polymer, or other device or material that mimics the mechanical, chemical, and/or electrical properties of neural tissue. The purpose is to integrate devices that behave as though they were natural neural tissue. 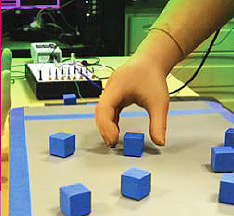 Photo: From the "Natural Sensation for Amputees" project. Investigators with the APT Center are pursuing a system that provides sensory feedback for the hand via a direct interface to the residual peripheral nerve. Sensors on a prosthetic hand control stimulation to electrodes around the nerves in the remaining portion of the amputated limb, which cause the nerves to transmit impulses to the brain that are interpreted by users as tactile perceptions on their missing hands that are directly related to touch on the prosthesis. Dr. Tyler is the principal investigator on this project.

Great Big Story: For Amputees, Reactivating the Sense of Touch