Amputation is one of the most significant, non-fatal co-morbidities of combat. Upper extremity amputation is particularly devastating. Upper limb loss also affects a significant percentage of the civilian population. The loss of either one arm or two, results in functional deficits and decreased independence.

Investigators with the APT Center are pursuing a system that attempts to provide sensory feedback for the hand via a direct interface to the residual peripheral nerve. Sensors on a prosthetic hand control stimulation 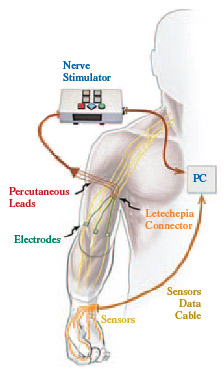 to electrodes around the nerves in the remaining portion of the amputated limb, which cause the nerves to transmit impulses to the brain that are intended to be interpreted by users as tactile perceptions on their missing hands directly related to touch on the prosthesis.

Results are promising in the first study subjects who described it as being equivalent to feeling a pulse with their index fingers. Sensory feedback increased awareness of the prosthetic hand immediately after turning the system on and improved the ability to grasp, hold and move small objects without looking at them in these preliminary studies. Furthermore, advanced stimulation techniques are reducing or eliminating the abnormal tingling sensation commonly reported with electrical stimulation.  The devices have now been in place for more than a year and may be a viable option for long term restoration of somatosensory function in the future.