Effects of Anti-oxidants on Performance of Brain-computer Interfaces 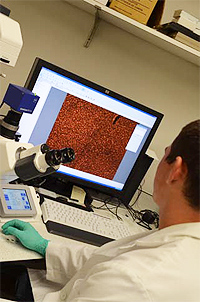 Investigators with the APT Center are exploring simple and effective means to improve the quality and stability of neural recordings obtained from intracortical microelectrodes, which are components of the brain-computer interfaces that may allow individuals to use volitionally-controlled thoughts to control an external device, such as a computer cursor, a robotic arm, or one’s own muscles. The majority of research in brain-computer interfaces has been directed at patients with SCI and Amyotrophic Lateral Sclerosis (ALS), who would benefit greatly from robust and reliable cortical recording technology. Yet, several biological mechanisms can lead to the premature failure of existing interfaces. Over time, neurons nearest to the microelectrode die off or get pushed away, so the ability to isolate large amplitude spikes of individual neurons declines so the ability of the patient to communicate with the computer diminishes. For this reason, we are developing a robust understanding of the time course of microelectrode-mediated neurodegeneration around the implant site. Further, we have shown that oxidative stress is a key component of the neuroinflammatory response to microelectrodes, and that oxidative stress correlates with neuron viability.

We have shown that the neuroinflammatory response to intracortical microelectrodes directly relates to the instability of neural recordings. The initial administration of resveratrol, a naturally-derived anti-oxidant, temporally reduces microelectrode-mediated oxidative stress, preserves neuron viability, and facilitates stable neural recordings. Our results imply that combinatorial therapies that include anti-oxidant treatment or coatings might be able to preserve the viability of cortical recordings and ensure extended use of brain-computer interfaces beyond what is currently possible.

American Association for Advancement of Science