The daily
A new weapon in the fight against sickle cell disease
18 Jun 2020
A technology developed initially at Case Western Reserve University is behind the global launch this week by a Portland, Oregon, company of a new, faster and low-cost diagnostic test for sickle cell disease (SCD). The announcement by Hemex Health comes just in advance of World Sickle Cell Disease Awareness Day on Friday, June 19.
“This is a special day for me and for my lab members,” said Umut Gurkan, the Warren E. Rupp Associate Professor in the Department of Mechanical and Aerospace Engineering in the Case School of Engineering. Gurkan leads a university team that also recently was awarded up to $3.7 million from the NHLBI to assess emerging genome editing-based therapies being tested for SCD at leading U.S. research universities and hospitals. Read more...

Devex
'Optimized for the underserved': A new diagnostic test built for low-income settings
17 Jun 2020
A new portable diagnostic platform could change the way sickle cell disease is tested, and offer a model for developing point of care tests for a range of diseases in low-resource settings. ... The portable diagnostic platform combines proprietary microchip electrophoresis technology, which is a miniaturized version of the traditional blood test, with artificial intelligence. Gazelle also includes a test for malaria, and the Hemex Health team is working to develop tests for anemia and COVID-19. ... Before Hemex Health started the development of Gazelle, with technology licensed from Case Western Reserve University in Cleveland, Ohio, it conducted a multistate research project in India, and collected ... Read more...

VA Research Currents
VA scientists testing new technology to absorb moisture, increase comfort with prostheses
11 Jun 2020
The Advanced Platform Technology Center at the Louis Stokes Cleveland VA Medical Center is highly regarded for developing innovative technologies that serve Veterans with sensory, motor, or cognitive deficits, as well as limb loss. ... One of the ongoing projects is aimed at developing a material to better absorb and channel the sweat that can build up inside the socket liner of a prosthesis. Read more...

PR Newswire
"For Such A Time As This -- OrthoChallenge" Winners Announced
10 Jun 2020
Six innovative ideas to help patients with musculoskeletal conditions have been selected to win the 'For Such A Time As This – OrthoChallenge.' These novel products have the potential to help orthopedic patients during and after the COVID-19 pandemic and reduce their risks during an operative procedure. Ronald Triolo, Stephanie Bailey, and Frank Zitko for the "Self-Leveling Walker for Safe Stair and Ramp Mobility," which adjusts... Read more...
Also in: Orthopedics This Week, BoneZone, Medical Products Outsourcing (MPO) Magazine

CU Boulder Today
Now closer to reality: Prosthetics that can feel
21 May 2020
Through an effort led by Case Western Reserve University and the VA, Segil and his colleagues have used a unique “neural interface” to give a small number of amputees back the sense of touch in their missing fingers. In a new study, published this month in the journal Scientific Reports, the team demonstrated just how effective this sensory restoration technology can be—helping one amputee to feel his hand adopt a series of postures, such as ... Read more...

Cleveland 19 News
How vulnerable are dams in Northeast Ohio?
20 May 2020
Experts described the flooding in Midland, Mich. as a 500-year event, caused by two dams in the area that failed.... Dr. Bill Yu is a civil engineering professor at Case Western Reserve University. He says there are around 1,400 “high hazard” dams in Ohio, 40 to 50 of those are in Northeast Ohio, but there are different types of dams built for different purposes. Read more...

Popular Mechanics
At the Bionic Olympics, Engineers and Athletes Make Miracles
27 Apr 2020
Popular Mechanics released an article about Mark Daniel, a pilot from the 2016 Cybathlon who competed in the Exoskeleton Race. At the event, he was impressed with the performance capabilities of the pilot from our Center's Team Cleveland, led by Dr. Ronald Triolo, and spoke with him at length about his implanted neurostimulation technology. As a result, Mark is now a participant in Dr. Triolo's standing and transfer research project. Read about his journey!

Crain's Cleveland Business
CWRU helps lead research efforts on potential cure for sickle cell disease
15 Apr 2020
Case Western Reserve University has received significant funding from the National Heart, Lung and Blood Institute to support work toward a potential cure for sickle cell disease. The institute's Cure Sickle Cell Initiative supports collaborative research to speed up the development of genetic therapies within five to 10 years, according to a post on the university's The Daily site. Umut Gurkan, the Warren E. Rupp Associate Professor in the School of Engineering, is leading a team "that has developed micro-engineered tools to assess blood samples from patients before and after gene therapy treatment" for sickle cell disease... Read more...

The daily
Reaching toward a cure for sickle cell disease
03 Apr 2020
Umut Gurkan, the Warren E. Rupp Associate Professor in the Department of Mechanical and Aerospace Engineering in the Case School of Engineering, leads a university team that has developed micro-engineered tools to assess blood samples from patients before and after gene therapy treatment for SCD. “The big-picture potential here is to test whether this is dream or reality when it comes to gene therapy curing sickle cell,” Gurkan said. Read more...

YouTube: VICE News
How Bionic Limbs Are Changing Lives
24 Feb 2020 (released on YouTube)
A bionic revolution is brewing, as recent advancements in bioengineering have brought about scientific breakthroughs in rehabilitation for people with disabilities. The most cutting edge research is happening inside the human brain, where implanted technology allows people to communicate directly with computers, using their thoughts. VICE's Wilbert L. Cooper travels to Zurich to see the first-ever bionic Olympics (aka Cybathlon, in 2016) and discovers a host of technologies that are expanding what it means to be human. APT Center's Team Cleveland won the gold medal in the electrical stimulation bike race.

U.S. Medicine
Balance Disorder Expert Works to Fill Growing Medical Need for Veterans
11 Feb 2020
Aasef Shaikh, MD, PhD, grew up in India as the son of two ENT surgeons, which he credits for his early interest in understanding the system that helps humans keep their balance. After finishing medical school, he immigrated to the United States to pursue a PhD in neuroscience, where his fascination with human balance only grew. Read more...

The daily
Winners of the SOURCE Intersections poster competition announced
23 Jan 2020
Support of Undergraduate Research and Creative Endeavors (SOURCE) hosts Intersections, a poster session where undergraduate students present their research and creative projects. The event, held each semester, is an opportunity for the Case Western Reserve community to learn about the array of academic work being done by students across campus. At the fall semester Intersections on Dec. 6, 2019, 10 student projects earned awards. First place in Engineering: Alan Dogan—“Selective PEGylation of Sirolimus for Enhanced Stability and Additional Functionalization,” mentored by Horst von Recum, Department of Biomedical Engineering. Read more... 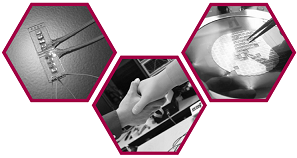