In 2005, Dr. Capadona completed his Ph.D. thesis studying the effects of surface properties of biomedical implants on the control of cellular response and function at Georgia Institute of Technology.  Dr. Capadona immediately began his career with the Department of Veterans Affairs as a Research Health Scientist.  At this point, Dr. Capadona became interested in the neurodegenerative response to implanted biomedical devices.  Since joining the VA, Dr. Capadona has received an Associate Investigator Award, a Career Development Award II, and is currently the PI or Co-PI of three Rehabilitation R&D Merit Reviews (VA equivalent to an R01). 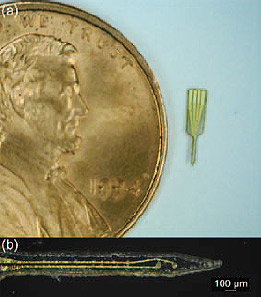 In August 2010, Dr. Capadona began a tenure track appointment in the Department of Biomedical Engineering at Case Western Reserve University. Dr. Capadona has co-authored 3 patents, 2 book chapters, over 100 scientific abstracts and over 40 peer reviewed scientific manuscripts, including one in Science and another that received the cover of Nature Nanotechnology.  His research articles have been cited over 3700 times. Dr. Capadona’s recent awards include: Crain's 40 Under 40 (2015), the Case School of Engineering Faculty Research Award, multiple graduate student mentoring awards, and the 2011 Presidential Early Career Award for Scientists and Engineers (PECASE).

Photo: From the Dynamic Intracortical Probes project. (a) Four-contact NC probe next to a penny, as a size reference. The large rectangular contact pads are at the top of the device, and the electrode contacts are near the tip of the narrow shank. (b) Close-up view of the shank of a two-contact NC probe, with the gold traces and electrode contacts visible. Dr. Capadana is a principle investigator on the project.

Watch this video to find out more about Dr. Capadona's lab at CWRU

Effects of Anti-oxidants on Performance of Brain-computer Interfaces